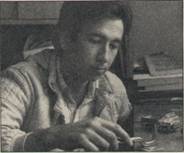 Veljko Milković was born in 1949 in Subotica (Serbia), and since 1952 he has been living in Novi Sad (Serbia), where he finished secondary school and studied History. Apart from being interested in past events, he is also a researcher, an inventor, an innovator and a writer. Furthermore, he works on futuristic projects. So far he has got around 114 inventions, some of which have been in use for years and has designed 29 granted patents. Moreover, he has received many domestic and international awards for his work spanning over many decades.

He invented a self-heating eco-house and a number of ecological innovations, which also have been in use for a long time. According to his drawings, many such eco-houses have been built in Novi Sad, Sombor, Zaječar, Ljig (Serbia)... He has taken part in about 30 scientific gatherings in the field of energetics and ecology as well as many projects concerning scientific research.

Among various domestic and international awards, he has received November charter of the city of Novi Sad in 2002 for the remarkable contribution in the field of ecology and energetic as well as in 2002 a gold medal of Novi Sad fair for the invention hand water pump with pendulum.

He is very familiar with Petrovaradin fortress (city of Novi Sad, Serbia); he has been exploring it since 1960. In 1965 he managed to decipher orientation marks at the crossroads and establish the logic of subterranean labyrinth with "^", "Y" and "T" crossroads. This approach helps him to examine the 20km deep undergrounds of the fortress in a faster and safer manner.

His engineering and ecological projects inspired by Petrovaradin fortress are in practice: "Selfheating ecological house", "Mushroom garden and greenhouse with reflecting surfaces" (mushroom gardens for growing bukovače near Čenej and Petrovaradin, Serbia, were built), Project "Forests for food production" (in use on several locations in the province of Vojvodina, Serbia and Montenegro) and "Autonomous battery charger".

In 1975, librarian Srećko Drk hired him as a guide for less known parts of the fortress especially subterranean military galleries.

Novi Sad museum awarded him with the letter of thanks for the "ardent contribution in research of the Petrovaradin fortress". 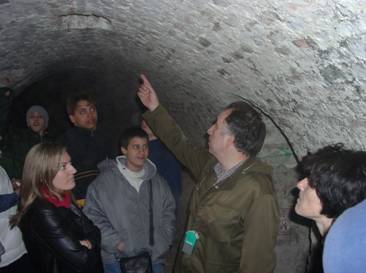 In the late 70's, as a member of scientific and technical editorial board of the Cultural Center in Novi Sad, he organized and lectured at panels about Petrovaradin fortress. Some of the participants were an academician and a professor Bogdan Brukner and a professor Milan Vranić.

An idea of a modern sod house as a new way of living gave him élan to continue with researching subterranean galleries.

In 1983, Veljko Milković and Mr. Srećko Drk founded "The club of friends of Petrovaradin fortress" within "Vladimir Nazor" library in Petrovaradin (Serbia).

In 1997 he announced the book entitled "Mysteries of Petrovaradin fortress", which was published as a feuilleton, a script and a book. That was the first time that the gap in the literature about Petrovaradin fortress and its underground has been filled. It is interesting that many journalists and authors like Mr. Živko Marković, a historian, claimed that subterranean military galleries represent the largest attraction in Petrovaradin.

In his numerous lectures and during short excursions he talked about dangers, but also about great tourist potential of Petrovaradin, Fruška Gora, Srem (Serbia) and the central part of the (river) Danube-basin.

During public appearances in previous years, Veljko Milković announced major archaeological discoveries from Palaeolithic age at the location of Petrovaradin fortress and in the central Danube basin. Experienced archaeologists stated that "it is beyond dreams" and that it was "absolutely unexpected"...

But it happened and it was confirmed by the latest archaeological discoveries from Palaeolithic age. In his numerous public appearances, Milković claimed that the central Danube basin is a cradle of prehistoric period, which was confirmed by the recent discoveries by European scientists. He is also in possession of a unique and unusual archaeological collection. He also gathered numerous minerals and fossils, from the Danube-basin, as well as remains of previous civilisations.

In the last few years he has been working in the field of single and double mechanical oscillations, which represent a new source of widely, used energy, based on which he has 22 approved patents. His present aim is to explore and use practically the potentials of double oscillations and, in connection to that, a new source of energy based on inertial forces and gravitational potential.

Among other things in his experiments, he managed to get 12 times more output energy than input energy. In last 10 years, no one argumentatively disputed research and measurings carried out by Milković. Through such achievements, Veljko Milković laid the path for new challenges in physics in the 21st century, which could be the forerunner of the new great scientific revolution.

Milković is in possession of numerous prototypes and models (photo & video), as well as ideas for various machines and devices. Over the years, Milković received many positive comments and opinions relating to his research from domestic and foreign physicists, professors, academicians, engineers, researchers etc. It is more and more definite that Milković's inventions can be used for production of numerous practical devices, thus creating a range of new products which could help in improvement of overall economical situation and better the situation in society.


So far he has published the following books: 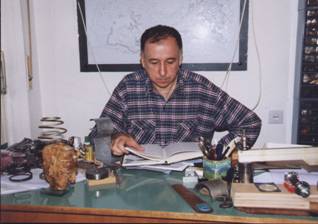 His book have been accepted both in domestic and foreign prestigious libraries, such as the Library of Congress, Washington DC and his publications can be found in the British Library in London, Moscow Library and Library of Alexandria. His publication have also been quoted in many Internet encyclopaedias and other sources.


He also found the solution how to lessen the problem of the "endangered inventor" and needs to make his secret public. That is exactly what Veljko Milković is doing by publishing his books and publications.