At the beginning of the 1st century BC the area of Petrovaradin was inhabited by the Celts, only to be replaced two centuries later by the Romans, who raised their fortress under the name of Kusum somewhere between the present Petrovaradin and Sremski Karlovci. At that time the Petrovaradin rock was used as an observation post for the fortified Roman border of Limes.

This area was devastated by the Huns in the 5th century, but their state collapsed soon after. With the fall of the Western Roan Empire, the Byzantine Empire fortifies its borders n these protruded points of the territory. From that time, instead of the name Kusum, we have Petrikom. 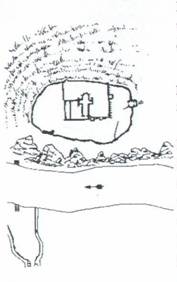 The turning point in the history of Petrovaradin is year 1235. When the Hungarian king Bela IV settled Cistercian monks from the French region of Champagne. That is when the first larger fortress within the parish of a Cistercian monastery was built.

In time, Petrovaradin becomes a more prominent settlement, mostly because of the Danube crossing and fairs with visits from traders from all over Hungary.

Tatar incursions are frequent at that time, but the real danger was coming from the Otoman Empire. After the fall of Belgrade in 1521. Turkish invasion moved towards north-west, so the conquering of Petrovaradin was one of the steps toward Hungary and Vienna. Fortified Petrovaradin was seized on 27/07/1526 and the fortress will not be under attack for next 161 years, during Turkish rule, when it was adapted to an extent.

Picture 1. Copy of the blueprint of the Petrovaradin area in the middle ages. 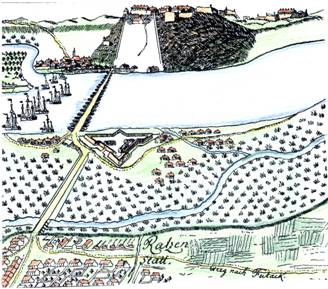 1687 the Austrian army takes over the fortress and starts building a new defensive object, because of the ongoing battles in the Danube basin and the Balkans.

After a short Turkish domination in 1690. There is peaceful period in the life of the Petrovaradin fortress after the victory of Austrian troops on 17/08/1691. That gives the opportunity for a systematic construction of the present fortress. By demolishing objects from Middle Ages and ones constructed by the Turks, 1692 began with the building of the fortress as it looks now.

It seems that the Austrians stole the idea for the project form the French war architect Marquis Sebastien Le Prestre de Vauban (1633-1707), who was one the most prominent engineers of the modern fortresses of the 17th and the 18th century, He was famous for fortresses spanning on large areas with underground galleries (forerunner of the Magino line). With the increase of importance of fire arms, fortified underground becomes more strategic as well.

SPicture 2. Novi Sad and Petrovaradin, detail from the map dated 1698

Duke Croy laid the corner stone on 18/10/1692 in the southern part of the upper fortress, on orders of the Habsburg Emperor Leopold I. The charter was also buried then, but the exact place is still unknown. In that way, the first bastion of the Petrovaradin fortress was built, carrying the name of the Emperor Leopold I. 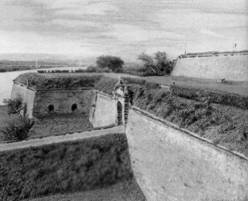 The construction was supervised by the Prince Savoy, Count Carafa, field marshal Kaprara and the heir to the throne Joseph. Hundred years of construction of the Petrovaradin fortress spanned over several rulers: Leopold I, Joseph I, Carl VI, Maria Theresa and Joseph II. First permanent garrisons were formed in 1702, and were made up of companies of Hungarian hussars and Serbian volunteers.

Picture 3 Bastion of the Emperor Leopold I and the oldest construction facility within the Petrovaradin fortress.

Eight brickyards in the homestead were making bricks for the new fortress. Bricks are larger than modern ones, and the lime was made in limekilns near Beočin (Serbia and Montenegro).

The basis of the colossal fortress had several highlighted parts (Upper fortress in the central part, Lower fortress towards north - Wasserstadt, Bicorn bastion - Hornwerk in the south, the Island fortress - Inzelšanac and the Bridgehead - Brikšanac on the opposite side of the Danube). South-western extended part was formed on the upper fortress, so-called Leopold?s fortress. Since the war was still going on, the Turks made a sudden move from Belgrade and reached Petrovaradin on 11/09/1694 and commenced a two-week siege, but could not take the fortress. As a memory to that siege, a plaque was placed on the portal of the eastern gate in 1694 (the road towards the "Gun turret").

Up to the beginning of the 18th century, following bastions were also completed: Inoćent, Ludwig, Scales with additional objects. This complex contained formed objects on the Upper and the Lower fortress, as well as the Bicorn bastion, which covers the area towards south. On the left bank of the Danube, the Bridgehead is being built and down the stream, the Island fortress. The construction was ended in 1780. Urban settlement was also built together with the fortress. 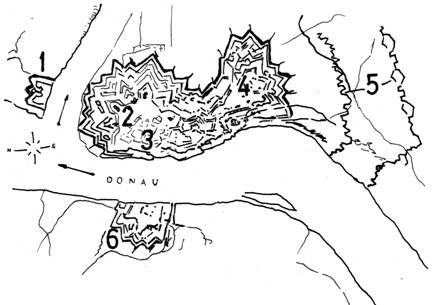 Picture 4. The Petrovaradin fortress in three centuries: 1- Inzel ditch / the island fortress sunk in the 19th century; 2- Wasserstadt - the Water City; 3- The Upper fortress on the Petrovaradin rock with dominant buildings; 4- Hornwerk / bicorn bastion with a Kronenwerk; 5 - Extended facility / unfinished ditches, disappeared in the earthquake of 1726; 6 - Bridgehead on the left bank of the Danube, destroyed around 1928

During construction, one event from the war history endangered the existence of the fortress. It was the battle at Petrovaradin on 05/08/1716 when 200,000 of Turkish soldiers led by Damad Ali-Pasha had a task to take the fortress and continue towards the north-west. The garrison counted some 8,000 men with 70,000 men in the army camp near today's Futog (the city of Novi Sad - Serbia and Montenegro). The commander of Austrian forces was Eugene of Savoy.

With the construction of the pontoon bridge (1697-1698) the fortress is connected to a fortified Bridgehead on the left bank of the Danube. There, a settlement of some 1,000 inhabitants develops and is called the Petrovaradin ditch. In 1699, after the peace treaty signed in Karlovci, the number of inhabitants is growing and the settlement becomes one of the biggest on the border between Austrian and Turkish Empire. On 01/02/1748 settlement of 4,620 people receives a charter form Maria Theresa declaring it "A free royal town" under the name of Neoplanta, Uyvidek, Neusatz - Novi Sad. 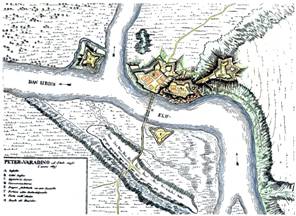 The last phase in the construction commenced in the 18th century with the building of the fortress complex on the right bank of the Danube. As a part of the Upper fortress, the following buildings are constructed: "The long barracks", "The simple barracks", "The gun turret", or the armoury later called Mamula. Plumbing system was also constructed, and a clock tower on the Ludwig bastion. The clock is still working (although it is a bit late in the winter and a bit early in the summer). Unlike other clocks, the big hand shows hours (because of easier recognition from distance) and the small hand less important minutes.

Four levels of the underground were constructed intensively from 1768 to 1776 ("arrow" crossroads). The length of these subterranean quarters is supposedly 16 km. But it seems that there is actually more.

Picture 5. The fortress and a sketch of Novi sad area from 1697 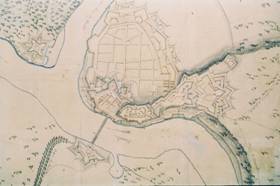 1760 is mentioned as the year when all works were finished, although there was some construction above and under ground for several more years. Not all work was finished, which can be seen from the visit to the site ( corridors with unfinished masonry work, "dirt tunnels", short dead-end corridors etc.).

Piture 6. A sketch of an unrealised plan for the extension of the fortification

Expanding over 112 hectares, these fortifications the second largest in Europe. The only bigger fortress is the one at Verdun, France, which was almost completely demolished in the WWI.

The colossal fort with its garrison could not be conquered with the military equipment of that time, and was therefore dubbed "The Gibraltar on the Danube". Narrow flow of the Danube under the Petrovaradin rock contributes to this comparison.

At the beginning of the 19th century, Petrovaradin becomes one of the safest fortresses in the empire, with 4,000 soldiers in the barracks and 400 guns. It is interesting that valuables from the Vienna court were kept here during Napoleon?s invasions. 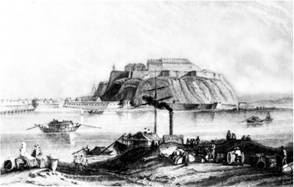 The most tragic day in the history of the fortress is 12/06/1849. Hungarian revolutionary army, led by the general Pavle Kis, used 200 cannons to bomb Novi Sad, where royal forces were positioned. Two thirds of Novi Sad was demolished.

Picture 7. Novi Sad bank and the fortress around 1830

A longer period of peace returns after the defeat of Lajos Kossuth, who emigrates on 13/08/1849. The money for the reconstruction of the city was provided from the banks. In mid-July of 1852, Austrian Emperor Franz Joseph, visited Novi Sad and the Petrovaradin fortress. The layout of the city was preserved to this day.

With the Austro-Hungarian treaty from 1867 and the fall of the Ottoman Empire, the strategic importance of the fortress is decreasing. Fotrified Petrovaradin is becoming infamous as a prison. Former artillery dungeon near the Belgrade Gate towards the Danube was transformed to the military dungeon. Afterwards, civilians were also kept there, in addition to military officers and soldiers.

During mid-19th century, there were plans to drill the Petrovaradin rock in order to make a tunnel for the Subotica - Zemun railway. At the same time, the first permanent bridge between Novi Sad and Petrovaradin was built. The bridge had a footpath and it was named after the Franz Joseph, but it was known among people just as the "Railway Bridge".

All the devastations so far missed the Petrovaradin fortress, so that it can be considered as one of the bets preserved and most beautiful fortifications in Europe. However, during peace time, negligence and vandalism took their toll. Parts of the fortress become dump sites. Until 1951, the fortress was a military facility, when the civilian authorities are taking control of it. That was when the changes started.

In addition to damage from the last decades, numerous construction works have been carried out, supplemented by creations of gifted artists and scientists.